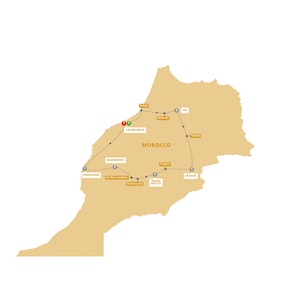 An in-depth Morocco trip featuring all the exciting sights, sounds and flavours befitting of its status as the gateway to Africa. Explore the ancient alleyways of Fes, spend the evening like a local in a riad and learn about the healing touch of Moroccan ingredients like argan oil.
Call to Book 800-829-5448
Get an Estimate View Dates Save for Later
Included With Your Trip
Additional Information

The intoxicating sights and sounds of Morocco are revealed on this epic adventure through an ancient land. Delve into the intrigue and romance of Casablanca, immortalised by Hollywood, before meeting your travel companions and Travel Director for a Welcome Reception.
Hotel: Novotel City Center

Journey to Rabat, Meknès and on to Fes

We continue along the coast to the capital, Rabat. Here we’ll embark on an orientation tour of the city which includes views of the grand 17th-century Palace and Mausoleum of Mohammed V. Travelling to the imperial city of Meknès, we'll see the grand gate of Bab el-Mansour, one of the most impressive monumental gateways in North Africa, adorned by green and white zeillij tiles. We arrive in Fes later today and spend the rest of the day at leisure, connecting with the symbolic heart of Morocco and the unique character of the country's oldest imperial city.
Hotel: Marriott Jnan Palace

Join a Local Specialist today to explore the Medina, one of the largest thriving medieval centres in the world. See the Royal Palace and Dive Into Culture during a visit to the round dye-pits and tanneries, revealing Morocco's ancient leathercraft. Later, you can admire traditional Moroccan handiwork during a visit to a carpet cooperative. Spend the rest of the day shopping or relaxing in a lantern-lit courtyard away from the Medina crowds. Join your companions this evening for a special opportunity to Connect With Locals over dinner for a Be My Guest experience, featuring Moroccan specialities served with wine in a traditional riad.
Hotel: Marriott Jnan Palace

We follow the old caravan trail south, stopping for a lunch in Midelt, a market town set within the high plains between the Middle and High Atlas mountain ranges. Continuing along the palm-fringed Ziz Valley and past the Tafilalt oasis, we arrive in the oasis town of Erfoud, regarded as the 'Gateway to the Sahara'. Its golden façades and towering dunes have made it a popular location for filmmakers for decades. This evening we dine at our hotel.
Hotel: Kasbah Xaluca

Journeying west, we arrive in Tinghir, one of the most beautiful oases in southern Morocco and home to the ruins of the ancient Glaoui palace. We continue through part of the Todra Gorge and cut through the mountains for one of the most dramatic views in the country. Here we will overnight at one of Trafalgar's Stays With Stories, Xaluca Dades, surrounded by panoramic views of the Atlas Mountains.
Hotel: Dades Xaluca

Venture through the High Atlas Mountains to Marrakesh

Blending effortlessly into the arid landscape, Ouarzazate has provided a backdrop for such famous movies as 'Lawrence of Arabia', 'Cleopatra' and 'Gladiator'. See the UNESCO-listed fortified village of Aït Ben Haddou in the High Atlas Mountains and continue through the Tizi-n-Tichka Pass to Marrakesh - the 'Red City'. Like many other former imperial cities in Morocco, Marrakesh comprises an old fortified city - the Medina - and an adjacent modern city. Marrakesh is home to Morocco's largest traditional souk (market) where you may wish to spend some time learning the art of haggling.
Hotel: Le Méridien N'Fis

Visit the ornate Bahia Palace during a city orientation with your Local Specialist and spend some time soaking up the energy of Djemaa el Fna Square in the Old Quarter with its palm readers, acrobats and snake-charmers. Spend the rest of the afternoon lingering in one of the city's beautiful gardens, discover the vibrant arts and culture scene or consider experiencing an authentic Moroccan show.
Hotel: Le Méridien N'Fis

We travel to the laid-back shores of Essaouira this morning. Stopping en route, we Dive Into Culture to visit a cooperative involved in creating cosmetics from traditional ingredients. Consider a delicious seafood lunch and enjoy some free time before joining a city tour of the UNESCO-listed Medina, the walled Jewish Quarter and Skala fortress. Spend the rest of the evening at leisure.
Hotel: Coté Océan Mogador

This morning we journey north to Casablanca where we will enjoy views of the magnificent Hassan II Mosque, built for the late King's 60th birthday celebrations. Later, we join our Travel Director and companions for a Farewell Dinner to celebrate an unforgettable voyage of discovery.
Hotel: Novotel City Center

Say goodbye to your newfound friends at the end of your Moroccan holiday. Find out more about your free airport transfer at trafalgar.com/freetransfers.